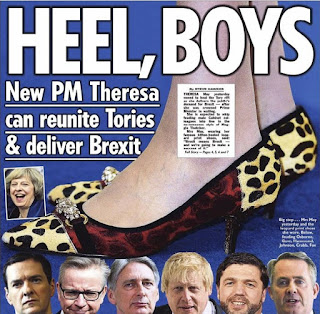 While this is the most dramatic example you don’t have to go far to find other mentions of her shoes. The Telegraph ran ‘Theresa May’s greatest footwear hits’ and ‘kitten-heals’ have been frequently mentioned outside ‘women’s programmes’ on Radio 4 over the last few days. While at least some of this coverage is celebratory and fun – and I confess to also being a shoe-devotee (the ‘Beauty Demands shoes’ are mine) – I can’t help again reflecting on the difference between how female and male politicians are covered. Hilary Clinton’s changing hair-styles and fashion are the subject of many column inches. For instance, Harpers Bazaar recently ran an article on ‘In Photos: Hillary Clinton’s Iconic Style’ and you can flick through ‘Hillary Rodham Clinton’s Changing Looks’, at InStyle; from her high school picture in 1965, through the notorious headband phase, to her current look. Furthermore, a quick internet search on ‘Hilary Clinton hair clothes’ brings up hundreds of articles on her hair (praise and shame), and on her looks (best and worst) and so on. 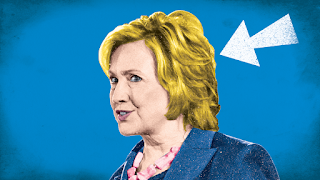 There is some coverage of how male politicians look, for instance of Boris Johnson’s wayward hair (regarded as a deliberate affectation by some) and similarly of Donald Trump’s hair. But when it comes to female politicians the looks matter more, and not simply for providing a splash of colour and, in the case of some of May’s shoes beautiful images, to brighten up the morning paper. As Jess Cartner-Morley discussed in The Guardian last month, Clinton’s clothes are discussed on serious news programmes (the Today programme is the example she gives) as saying something about what Clinton stands for and with regard to whether or not she will persuade voters, especially women, to vote for her. Kristen Bellstrom, writing for Fortune, argued in her article, ‘This Is Why We’re All So Obsessed With HillaryClinton’s Hair’, that: “On some level, we cannot separate women from the way they look. While we can laugh at Trump’s goofy hair and then move on, Clinton’s hair is somehow the embodiment of her character. Changing hairstyles mean she can’t be trusted. A matronly look means she’s pandering to women. An expensive haircut mean’s she’s lost touch with America”.

It is still the case that women in the public eye (and I argue in my forthcoming book Perfect Me! increasingly all woman in an increasingly visual and virtual culture) are held to different standards than men are. (See previous blog post for more on the book). Further, I argue that as the beauty ideal functions ever more as a dominant ethical ideal, it is harder and harder not to conform to the ideal. And, as the examples of female politicians show clearly, whether or not you choose to conform, others will judge you on your appearance and more than this make ethical judgements about character from your appearance. The difference in the way male and female politicians are covered in the press shows that norms remain hugely gendered. Women are subjected to a scrutiny which men are not. But even though as yet men are not routinely and standardly judged on appearance – at least not in the same way – there has been more attention to appearance in the current campaigns, and it might be that the divergence we see between the coverage of Trump and Hilary, or Johnson and May, will be less evident in the future.
That appearance matters and matters more – and for both young women and men – is increasingly well documented. For instance, a report this year by the YMCA on ‘The Challenge of Being Young in Modern Britain’ reported body image issues as the third biggest and most harmful challenge facing young people in Britain today (after lack of employment opportunities and failing to succeed within the education system). The evidence from many sources tells us that worries about body image, and the feelings of failure which go with such worries, rise year on year for both young women and men. This suggests that in the young at least there may be less inequality between how much attention women and men need – or will need – to give to their appearance. I wonder whether male politicians in 2050, or 2075, will likewise be judged on their appearance? Will they have their shoes – or biceps – routinely commented on in a similar way that today women in and out of the public eye constantly and continually do?
Today’s coverage suggests the gender divide is alive and well, but the body image data suggests differently. Can we even imagine a time when both men and women are equally judged on their looks?  If we can should we welcome this as equality? At last men are subject to what women have always been subject to? Or should we worry more?
Heather Widdows is the John Ferguson Professor of Global Ethics in the Department of Philosophy at the University of Birmingham. Heather served on the 2014 REF philosophy sub-panel, she is a member of the Nuffield Council on Bioethics and currently holds a Leverhulme Major Research Fellowship which is allowing her to work Perfect Me! (under contract with Princeton University Press). She is the author of Global Ethics: An Introduction (2011) and The Connected Self: The Ethics and Governance of the Genetic Individual (2013). She has co-edited, with Herjeet Marway, Women and Violence (forthcoming), with Darrel Moellendorf The Routledge Handbook of Global Ethics (2014), with Nicola Smith, Global Social Justice (2011), with Caroline Mullen The Governance of Genetic information (2009) and, with Itziar Alkorta Idiakez and Aitziber Emaldi Cirión, Women’s Reproductive Rights (2006).