We were very sad to hear the news of the death of James Partridge on the 16th August 2020 (https://faceequalityinternational.org/news/james-announcement/). James was an amazing man, a true trail-blazer in his campaigning for appearance diversity and face equality, who helped change public perceptions of and attitudes towards facial disfigurement. His death is a sad loss to all, although of course most of all his family. His post below (first published in 2018) shows how he made his arguments with reason, charm and humour, but also with passion. For further tributes to James, see: https://jamespartridge.muchloved.com/

I remember being absolutely staggered at the time. It was the mid-1980s, 15+ years since I’d acquired my imperfect and unique looks. Nightmare on Elm Street had broken box office records and spawned a new genre of horror movies. I was minding my own business walking down a street in London when a wag on a scaffolding rig shouted: “Hi, Freddy, you nasty piece of work” to much applause from his sandwich-eating mates.

They were much surprised, I think, by my speedy and gently assertive yelled reply (not angry as they probably expected) as I walked on: “Actually, my name’s James”. I held my head up, adopted a resilient mindset (aka ‘a thick skin’) and moved on untouched.
I do have some passing likeness to Freddy Krueger, I suppose: serious facial scarring (after a car fire when I was 18) and a sub-digital left hand. But that’s as far as it goes. 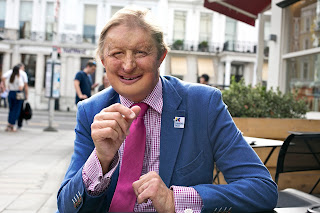 An isolated incident? Not for me because it happens from time to time even 30 years later. And more generally, No too. For centuries, popular culture and religious iconography have belittled and damned those with scarred and unusual faces – starting with gargoyles and imagery of Hell. But the coming of photography and movies in the 20th century took the stigma to a higher level. Hollywood and film makers around the world found it very convenient to use facial scarring, irregular teeth and asymmetry as a (lazy) shorthand to depict depraved, nasty, mean, evil and villainous characters.

This myth, “Facial imperfection is bad, scary and undesirable”, is one of the three stereotypes that make up face-ism in today’s global culture.1 It undermines the lives of those of us living with imperfect faces. The effect is to demonise and scapegoat; it also offers names and a vocabulary with which to ridicule and ostracise us. Especially children and young people in school, and on social media where teasing and bullying are rife.

And the myth doesn’t just touch people like me with burn injuries. The reasons why someone’s face may be imperfect are multiple because there are numerous conditions that affect people’s appearance: congenital conditions like cleft lip and palate, birthmarks and cranio-facial syndromes, scarring from accidents and violence, facial cancer treatments, skin conditions like acne, vitiligo and psoriasis and facial paralysis from Bell’s palsy or stroke, and many others.

All of us are vulnerable to other people’s assumption that our imperfection means we will be bad, scary and undesirable. Worse still, we may find it difficult to free ourselves from our conditioning and so apply the same face values to ourselves. Self-imposed stigmatising.
The list of movies is long. Where to start? The Bond films are notorious and continue to perpetuate this stigma: Dr No, Blofeld, Raoul Silva, Le Chiffre, Jaws and Emilio Largo. Then there are films with characters like Two Face, Scarface and Cyclops. The horror genre gives us the Zombies, the dead reincarnated, and many ghouls. I’m no movie buff so tell me more!
A recent nasty was in the 2013 Disney offering The Lone Ranger, starring Jonny Depp, which invented a really malevolent villain: Butch Cavendish. A toy made by Lego of this character to coincide with the film’s launch described him on its website as “a ruthless outlaw whose terribly scarred face is a perfect reflection of the bottomless pit of depravity that passes for his soul”. Nice. The website soon removed this reference on being challenged by Changing Faces but the stereotyping was there for all to see.
My own ‘favourite’ is the depiction of the nasty, evil and depraved Orcs in the children’s blockbuster movies based on Tolkien’s The Lord of the Rings. Tolkien himself described Orcs in one of his Letters: “…they are (or were) squat, broad, flat-nosed, sallow-skinned, with wide mouths and slant eyes” [Carpenter, H., (1981). The Letters of J. R. R. Tolkien. Houghton Mifflin, Boston.] Not a mention of a scar. But in the films, their faces are scarred and distorted as if from fire and violence. A whole generation of young movie goers and TV watchers have been systematically prejudiced into face-ist thinking: evil/nasty = scarred. [You might like to look at this to check your own thinking: https://www.youtube.com/watch?time_continue=5&v=6va7WsWyWTM]
The problem is that this ‘bad, scary and undesirable’ face-ist stigma is not just perpetuated in movies and ancient mythology. TV shows do it too and Changing Faces now issues media guidelines to journalists and broadcasters on a daily basis (see https://www.changingfaces.org.uk/wp-content/uploads/2016/03/Media_Guidelines_FINAL.pdf). They contain the principles and best practice in reporting and covering the lives of people with unusual faces. 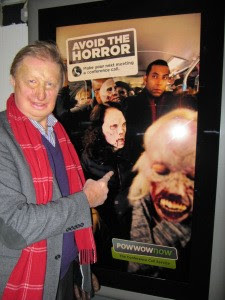 Corporates commit face-ist offences too. In 2015 the conference call phone company, Powwownow, concocted an advertising campaign under the banner of  ‘Avoid the Horror’ featuring people with scarred faces that closely resembled burn survivors in silicon masks. The company claimed they were Zombies (as if that made a difference). The face-ist message was clear: avoid the ‘nasty’ rush-hour commuting by using a conference call facility.
And it’s not just adults who are affected. In 2014, flavour-of-the-month tech company called Mind Candy created a set of baddies in Moshi Monsters, their online game viewed by millions of children aged between four and eight years old across the world. The baddies are all lumped into one family, the Glumps, with names like Freakface, Fish Lips and Bruiser, all with classic face-ist descriptions attached: “Fish Lips in a one-eyed blob of badness”.
The company refused point-blank to change but I’m sure the negative publicity which a vigorous campaign by Changing Faces stirred up contributed to the game’s falling popularity.
And in children’s literature too. Just recently I was reading a lovely story, Hairy Maclary, to my four-year-old granddaughter and turned a page to meet one of the villains in the piece: the ‘toughest Tom Cat in town’ – no problem with that idea… But I do have a problem with his name: ‘Scarface Claw’. http://www.hairymaclary.com/characters/scarface-claw/ This is an old 1980s storybook but it should carry a face-ist health warning!
Face-ism in our visual culture can be challenged. Watch out for it, please. Report it. Things can change as other equality movements have demonstrated so strongly.
Further reading:
For a commentary (in which I would contest a few points) on the 2017 film, Wonder Woman, see https://www.arielhenley.com/home/2017/7/7/as-a-woman-with-a-facial-disfigurement-this-wonder-woman-villain-pisses-me-off-bustle

James Partridge was the director of Face Equality International, an alliance of Non-Governmental Organisations, charities and support groups which are working at national, regional or international levels to promote the campaign for ‘face equality’. Previously, he was the Founder (in 1992) of Changing Faces and was until Sept 2017, its CEO.

Men’s body dissatisfaction is serious: But we shouldn’t blame women for it

Rebel with a Cause