Beauty’s neglected harms – MagazineNP
Skip to content
beauty ideals and norms
admin
No Comments
FacebookTwitterPinterestLinkedIn
In a just published paper I consider what beauty would look like if we changed the lens and looked at beauty not as a collection of individual choices, but as a public health concern. Would changing the lens transform how we regard the harms of beauty and the extent to which we think we should intervene to address such harms?
Changing the lens from individual choice to public health has been decisive in a number of debates. The classic example is attitudes to smoking. Whether or not to smoke was once regarded a matter of individual freedom and choice. The dominant view was that adults who know the risks should be left to make their own decisions. In an era where stop smoking campaigns are routinely promoted by States, health professionals and NGOs, and it is even regarded as acceptable to shame pregnant women for smoking, the notion that this is an individual choice which should not be intervened with is long gone. Sometimes intervention is justified on the grounds of ‘harms-to-others’ (for example, in the pregnancy case or to protect workers in public places from passive smoking). Yet intervention is also to protect from self-harm. Putting health warnings and gruesome pictures on cigarette packets is not to protect from others, but to protect from the self.
When it comes to beauty much of the discussion, especially amongst policy-makers, ethicists and lawyers has focused on harms to engaging individuals; cosmetic surgery recipients and beauty practices users. Yet individuals choose to engage (however constrained the choice) and therefore if harm occurs, this can be said to be ‘self-harm’. A broad definition of self-harm includes the practices that individuals do to themselves, and those which they employ others to do to them. Understood this way the focus on engaging individuals is odd, as prohibiting self-harm is often considered troublingly paternalistic. While professional organisations, such as doctors’ associations, understandably focus on engaging individuals (they after all are the ones doing the operations), why policy-makers have limited themselves is perplexing. It is exactly the task of policy-makers to consider harms across their jurisdictions and to recognise the interaction of practices, policies and norms. The task of policy-makers is to put in place governance frameworks which leave individuals space to live the lives they choose as long as they do not harm or unduly proscribe the freedom of others. So why neglect the harms-to-others and the restriction of others’ freedom which comes from rising beauty demands?
To consider accurately the harms of beauty a broad frame is required, one which can recognise the harms-to-others which result from increasing engagement in beauty practices and the knock-on effects as engagement is normalised. Such harms fall not only on those who choose to engage but on those who don’t, or who only engage enough to meet minimal standards of beauty; who wish to be ‘normal’ or ‘good enough’. There are numerous possible – direct, indirect, individual, group, communal and general – harms which might attach to the rising demands of beauty. These include general harms of discrimination, harms of unequal distribution of beauty, intergenerational harms, gendered harms from hyper-sexualised beauty norms, and harms to particular racial or ethnic groups.  For example, appearance discrimination, ‘lookism’, has been increasingly discussed and has been compared with sexism and racism (Etcoff, 1999; Swami and Furnham, 2008). Appearance discrimination is a broad category which encompasses a number of possible harms. For example, in some forms it could be considered a general communal harm in that a society which discriminates on appearance grounds creates a toxic environment in which appearance matters more than other goods (similar to normalisation arguments; Widdows, 2018). Alternatively, appearance discrimination can be considered group harm; limited to a specific group which is singled out and discriminated against. Finally, appearance discrimination can be an individual harm; experienced by individuals who are denied employment or other goods on appearance grounds. In the paper I focus on three different types of harm which might attach to beauty in order to illustrate the range of types of harm and the extent of such harms:
1.      Direct harm to providers 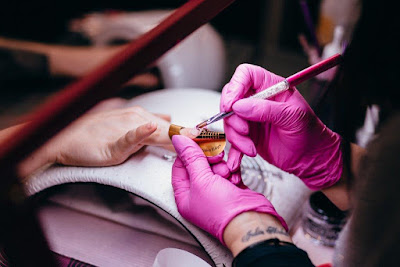 The first harm is to providers at the less privileged end of the spectrum – nail technicians, beauticians and hairdressers, as well as so-called “seagull” surgeons (flown in by cosmetic companies to do a Griffiths and Mullock, 2017). While the focus has largely been on surgery, very many beauty practices (including invasive practices) are not carried out in medical settings or by medical professionals. If we think, as I have argued we should, that cosmetic surgery is better conceived of as a beauty practice rather than a medical practice then we can posit a continuum of beauty practices. At the lower end of the spectrum are providers who work in non-medical settings at the less-invasive end of the beauty practice continuum. Such beauty practitioners are much less likely to be regarded as professionals than medics. Given the relatively low value placed on such beauty work, such workers often find themselves in highly competitive environments, vulnerable to being priced out of the market or replaced. As such they are unable to ask for, or to provide for themselves, better pay and less harmful and risky working conditions if they wish to keep their jobs and remain competitive. The harms which fall on beauty providers are significant, and yet have rarely been at the forefront of the policy debate.
series of pre-arranged operations in quick succession;
2. Indirect, specific harms to those who are ‘abnormal’
The second harm I explore is to those who are ‘abnormal’ so cannot conform to minimal beauty norms; and I use the uncomfortable and problematic term ‘abnormal’ deliberately.  Those who fall into this group are disfigured at birth or by accident or have physical features which fall dramatically outside the normal range. I argue that those in this group are more visible in a culture where we ‘fix’ what can be fixed, and therefore more vulnerable to harm. The harms which such a group might suffer include; harms with regard to self-conception and identity (including lower self-esteem and increased feelings of shame and anxiety); harms of increased stigma and discrimination; and harms of exclusion. As appearance increasingly matters for presentation and communication in an increasingly visual and virtual world, social exclusion is a real risk for those who cannot meet the appearance norms of the digital world.
3. Indirect, general harms to all
The third harm I consider is the indirect harm to all. As more is required to meet minimum standards more of us fall short and fail. As more engage so non-engagement stands out and becomes unusual and eventually abnormal; in the words of Susan Bordo “the ordinary body becomes the defective body” (Bordo, 1997). For example, it is the hairy body which is now abnormal. Beauty requirements are enforced by social norms and expectations, rather than by coercion, but nonetheless the list of beauty practices which are regarded as required is increasingly extensive and demanding. At the same time attaining beauty standards matters more. Body image is cited as the third largest and most harmful challenge facing young people in the UK (after lack of employment opportunities and failing to succeed within the education system) (YMCA, 2016). The literature on which factors are most important in feeding the rise in body image anxiety is large, contested and indeterminate. But all agree that body image anxiety is now ubiquitous. Such anxiety results in lower self-esteem, disordered eating behaviours and eating disorders, impaired social and occupational functioning, as well as poorer day-to-day interactions and increased problems with sexual functioning (Cash and Smolak, 2011). Indeed so extensive is such anxiety that some argue that “the high prevalence of negative body image is a significant public health concern due to its negative physical and psychological health outcomes” (Diedrichs et al., 2011). If these effects could be tracked to a physical cause, for instance the taking of a recreational drug, or as a side-effect of a pollutant, then such causes would immediately be targeted.
Beauty harms – including the three I focus on – immediately become visible if beauty is reframed as an issue of public health rather than individual choice. Focusing on engaging individuals results in a skewed picture which makes significant and potentially devastating harms invisible.  If beauty were reframed as a public health issue then harms, to providers, to groups and to us all, would be far easier to recognise.  Indeed, recasting beauty harms as public health concerns provides a reason, even a duty, to think about others, and perhaps to intervene.
To read the full paper go to: http://www.jpe.ox.ac.uk/

Heather Widdows (University of Birmingham) works in the Philosophy Department at the University of Birmingham. She works on Global Ethics, Bioethics, Virtue Ethics and Feminist Theory. She is currently working on beauty as an ethical and increasingly global ideal and has a forthcoming book with Princeton University Press, Perfect me, on the topic.